Polina Demidova, an English teacher, joins us for this week’s Industry Voices, talking to us about her experience of growing up learning English, where she spent time in Malta, the UK, and Australia, which contributed to her belief that the world is becoming a community through language learning. 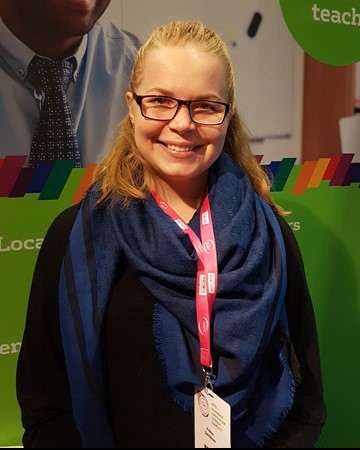 About me
My name is Polina and I’m from Russia, from Moscow. I’m currently working as an English teacher for a language school, and also do freelance work.

Studying abroad and learning English
I’ve studied [English] since I was a child. I went to different English courses in Australia, Malta and England and I also had a great education at my university and college with lots of use of English, and I participated in lots of international conferences which was very interesting.

Studying abroad was a really great experience. My first time in Malta was when I was eight years old, which was crazy for me as I was a little girl alone in another country. Later on, I went to Australia with my brother which was a very cool experience. The English there was a little different from British English, and the experience was great. After that I returned to Malta and later went on to the UK which was very helpful as I felt that I jumped over the ‘wall’ and conquered my fear of speaking English.

Why travel to learn a language?
You have to do it! You shouldn’t be afraid to move to another country because people there are always ready to help you, ready to support you, even if they don’t speak the same language as you they try to understand you. You really just have to try it!

The importance of global language learning
We are in a globalised world where the sense of international community is strong. We no longer think about which continent people are from. Being able to speak one language with lots of different people can create a great community feeling. It can build strength, help with networking and help to bring people together, which is great. I think everyone should know more than one language. English is great, but there are so many languages that we can start learning so we can communicate with other people.

Polina chatted with IHWO at the IATEFL conference in Brighton, UK in April 2018.