When Kate Boyle won a competition with International House to study abroad for one month, she never expected that she would end up staying in Spain for 3 years, becoming a teacher… and writing her first novel! Here, she recounts her journey with IH, the difference between learning a language at home and abroad, and the euphoria of being able to visit a pharmacy and order something in Spanish!

Where my journey started

International House set me off on my adventure! There was an IH competition for free language lessons – it was called something like ‘The IH Discover your Dream Competition’ – and I thought, ‘Why not enter?’ as I was enjoying learning Spanish at the time. So, I did and then I forgot all about it. A few weeks later, I received an email saying I’d won a month of Spanish lessons that I could take anywhere in the world. It was fortuitous timing because I’d just left a job and was wondering what I was going to do with my life, and then this happened. So, I went to Spain for a month… and ultimately then ended up staying for nearly three years!

My experience with IH Madrid

I’d been to Barcelona and loved it, but I’d never been to Madrid, so I thought ‘why not try it’! I had a lovely teacher and the classes were small which was great. The material was fun and stretching and IH were really helpful, especially with the cultural side of things, so I felt I got to know Madrid and settled in pretty quickly.

I completely fell in love with the city. The madrileños were always so keen to help and so welcoming, which was great, because I’m naturally quite a shy person. I always think that there are two main types of people when it comes to learning a language: those who just want to get their point across and they don’t mind making mistakes; or people like me who only feel comfortable saying something when they know it’s right. I think the people in Madrid were so good at helping me to come out of my shell in that way. They didn’t mind if I made mistakes and that made me feel so much more confident – they were really helpful.

Why I wanted to learn a language in the first place

My eldest brother married a Chilean years ago and when we went to Chile for the wedding. I felt so embarrassed that all her family had made such an effort to learn English and I couldn’t really say anything other than ‘hola’. It made me think of how lucky we are, in a way, as native English speakers, to not have such a strong need as other people to learn languages, but this also makes us very lazy. I think you get so much out of being able to communicate with people in their own language – it’s a completely different experience. So, I came back from the wedding and I started having Spanish lessons once a week.

The difference when studying abroad

I realised once I got to Madrid that the difference in speed that you learn at by being in the country where the language is spoken as opposed to being in a class at home is amazing. It was definitely worth going to Madrid – I improved so much more quickly there. Being surrounded by the language… you absorb so much more without even realising it. You hear people talking, you see adverts, you recognise words the whole time…

You’re forced to learn and to practice all the time. If you’re sick, you’ll need to go to the doctor. You may well need to rehearse your sentences beforehand, but you have to speak. I remember pacing back and forth outside a pharmacy practicing my lines, but then the feeling of euphoria when I came out having succeeded in getting what I needed was amazing. However much role play you do in class, it doesn’t give you a high like that. I studied French at school for years and I don’t think I ever got that satisfaction and that enjoyment, that feeling I had in Madrid, mainly because I never really spent any time in France.

I had often considered teaching as a career move and this seemed like a good opportunity to try it. I had become much more curious about languages in general whilst learning Spanish, and much more intrigued by the English language too. In this country I don’t think we’re really taught the technical side of the English language very well at school. When I did the TEFL course I had no idea what the present perfect was for example, or what phrasal verbs were – I didn’t know any of that.

We really don’t [know the technicalities of English as native speakers], and that shocked me. I always thought I was quite a wordy person with a good understanding of the language but I soon realised I had a lot to learn! I became curious about the origins of words, and one of my favourite comments from a student was ‘what’s a selfish person? Is it a person who sells fish?’ And I thought to myself, ‘of course not, but that seems so logical!’

The inspiration to write my book 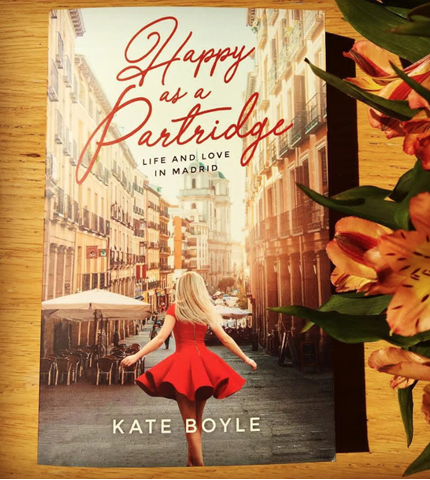 I had so many entertaining, unpredictable, hilarious experiences in Madrid, and initially I just wanted to remember those times and have a record of them for myself. Writing a novel is something I’d always thought of doing, and what began as a simple diary rapidly developed into a book. I had never appreciated the level of performance and unpredictability in teaching and I loved it, especially some of the things students say to you. The protagonist in the book works as a TEFL teacher too and some of the tales are loosely based on my own teaching experiences. The story combines her work, romantic entanglements and entertaining experiences as she gets to grips with life in the city and I like to think of it as my love letter to Madrid!

Looking back now, I think it was all meant to be. And when the International House language lessons landed in my lap, it felt like fate and moving to Spain was the best thing I ever did!