Next up in our Industry Voices series, Matthew Clark, a researcher for teacher development at New Oriental Group, talks about his experience of the teaching industry in China, the professional benefits of learning Mandarin, and how the language is all about the four tones. 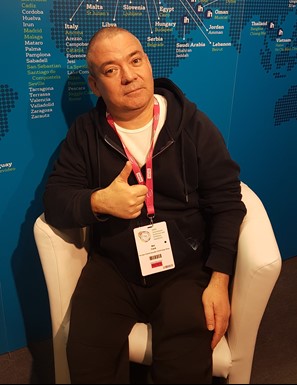 About me
“My name is Matt. I’m from London but I’m based in Beijing where I work for the New Oriental Group and I work mostly in research for teacher development. I first moved to China in 1999 and I intended to stay there for a year and then move elsewhere. Now it’s almost 20 years later and I’m still there. There’s just something about China... it’s actually quite easy for expats to live there. I think there’s an assumption that it’s very foreign, it’s very difficult, you’ll have culture shock... but China is actually set up quite well for the expat worker to live quite comfortably.”

My experience of the teaching industry in China
“[There's been] a big change more than anything. When I first started working there in 1999, teacher development wasn’t really a thing – even in the bigger schools in the bigger cities, it was an aspect that seemed to be either unknown or ignored. Now you’ve got CELTA centres popping up all over the country. A larger proportion of the teachers now are taking accredited qualification like TKT, CELT-P, CELT-S, so you could say that now it’s going to the other extreme.”

Chinese language learners
“I think the majority of learners are learning English because of the school curriculums. There is also a percentage who are learning for fun, because they are interested in the language, but they tend to be the post-school learners – young adults, working, and maybe they feel that as part of their skill set as a young working adult, improving their English is going to be beneficial to them. They tend to be the learners who are learning, for example, through online classes and things like that. But I’d say the majority of under 18s are doing it because of a fairly rigid English curriculum in school.”

Is Mandarin the next language we should all learn?
“I would say that there are probably enough English speakers in China so that if you were in a business situation where you needed to communicate with someone there, there would usually be a Chinese person available who could act as a translator or communicator. However, I do think we’ll see a trend where Mandarin becomes the third language that schools teach after languages like French and Spanish.”

How to learn Mandarin
“Start with the tones, because it’s very easy to get ahead of yourself and I had this problem where I was learning lots of vocabulary and making lots of sentences, but I tended to ignore the four tones. You get to a certain point and then people will say to you, ‘your vocabulary is really good, your sentence structure is very good, but you tones are rubbish’, and they will really notice it. It creates a bit of an imbalance and it looks like you’ve worked hard on some bits of the language and ignored this one. There’s a good example, 'mai' and 'mai', which is 'buy' and 'sell'. So it’s the same word for both but they are a different tone. I sometimes get them mixed up and my Chinese friends say, "You can’t get those mixed up!" Although I always argue that if I’m going to the shop to buy a can of coke and I use the wrong ‘mai’, the shop keeper isn’t going to misinterpret that as ‘I want to sell you a can of coke’! Context helps a lot, and that’s the same with any language, using the wrong word and getting your grammar goofy, you just have to be brave and use it as much as you can.”

Matt chatted with IHWO at the IATEFL conference in Brighton, UK in April 2018.