Peter Hayes is Appointed the New Chairperson of the IHWO Board

We are delighted to announce that the International House Board has appointed a new Chairperson, Peter Hayes. Many of you will know Pete as he is one of the directors of International House Manchester and has been part of the IH family for a decade.

The IHWO team are excited to be working so closely with Pete, “We are delighted that Peter Hayes from IH Manchester will be stepping in as Chairperson from 1st January 2023,” commented Emma Hoyle, Managing Director of IH World. “He will do an excellent job of guiding our organisation through the next set of challenges.” 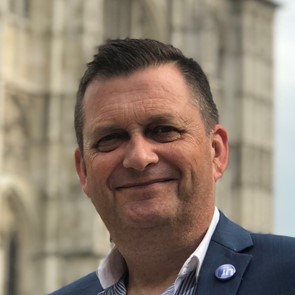 For those that don’t know Pete’s history, he started his career as a teacher with a job in Verona, Italy where he met his wife Katie (who is also a Director of IH Manchester). Having done the Dip TEFLA, he then moved to Prague to teach at The Bell School. He held various academic management posts in Oxford, Stafford and Cheltenham before, in 2006, becoming Director of the school that became IH Manchester.
IH Manchester joined the network in 2013 and Pete has been a key figure in the community, embodying the principles of International House through his support of the network and fellow IH schools. He has served on the IH Board of Directors since June 2021 which has been good preparation for his role as Chairperson.

On a personal note, he is a man of many talents and interests! He plays the cornet, the guitar and the harmonica. He loves running, he set up a park run in an open prison (no one escaped). He used to be a hairdresser but then decided to go to law school. He also studied biochemistry and loves live music, live sport, politics and food and wine.

Pete is every bit as excited as the rest of the network with his appointment, “I love this industry because I've always got a tremendous buzz from helping people get where they want to be,” he said. “And that's what we all actually do, isn't it? We help people to be who they want to be. We open doors to life opportunities. But, most of all I just love working with people. And since we joined IHWO back in September 2013, I've learnt that there is nothing better than IH people.”

We are confident that he will be a driving force in IH continuing to innovate and lead the way in language teaching around the world. He commented, “I do now feel a big responsibility to help make the new company structure work, as well as helping IHWO to continue to move forwards and navigate the exciting but challenging times ahead.”

The network is delighted with the appointment of Peter, but it also marks the end of an era as Monica Green, the Executive Chair, stands down. As Executive Chair, Monica has truly shaped the organisation that exists today. Her leadership, expertise and wisdom have guided International House through many decades of highs and lows and her dedication is reflected in the global network we see today.

In Pete’s words, “It is only by serving on the Board that I have fully understood exactly how much Monica has achieved for our global network and how much better the organisation is for her leadership. Brava Monica and thank you on behalf of us all.”