An Activity for Oral Fluency Development

The following article will outline a variation of the popular ESL game, ‘Yes/No’, using research from Paul Nation (1989) as its theoretical foundation. While this activity has been tested with low-level learners in South Korea, I see no reason why it cannot be implemented in a range of ESL settings, perhaps up to intermediate level.

The attainment of oral fluency represents a significant hurdle for English language learners in South Korea. During my 4 years of teaching there, students’ difficulties in this area were glaringly obvious. In their search for an explanation, scholars have pointed to the grammar-centred school curricula as a major contributing factor behind Korean students’ low levels of fluency (Park 2009; Shin 2012). It is a persistent problem but can we find solutions in the TESOL literature? Indeed, we can, and my own view is that we should always base teaching activities on the findings of peer-reviewed studies.

What is Oral Fluency?

Many definitions of oral fluency exist in the literature, including an influential early one by Fillmore (1979; cited in Nation 1989: 377), who defined oral fluency as not having “to stop many times to think of what to say next or how to phrase it.” Given that a literature review of fluency is beyond the scope of this article, I will proceed with the assumption that most of us recognize fluency when we hear it. Before outlining the activity, however, I will discuss Nation’s framework for the design of oral fluency activities.

In his 1989 article, Nation identified the following key criteria for the design of fluency-based activities:

Nation proposed an activity called 4/3/2 to meet these criteria. In this activity, students tell the same story three times to three different partners, but with less time to do so on each occasion – namely, 4 minutes the first time, 3 minutes the second time, and 2 minutes the third. The idea behind this is that students, under progressively tighter time constraints, would be forced to produce their story more fluently on each turn.

There are other activities that can be designed using the same framework. Therefore, I decided to adapt the Yes/No game to develop my students’ levels of oral fluency. In the traditional Yes/No game, students have a list of questions on a deck of cards, which they ask of the other student. If the other student says “yes” or “no”, they lose 1 point. Given how often we respond with either “yes” or “no”, the challenge of the game is to give an affirmative or negative response using language other than simply “yes” or “no”. I will now describe the activity in detail and then explain how it conforms to Nation’s framework.

How the ‘Yes/No’ Game Works

The first step is to design the worksheet (see Appendix A). In this worksheet, I write a list of 4 ‘yes/no’ questions – i.e., questions that require an affirmative or negative confirmation. A simple example of this would be a question like, “Do you have any brothers or sisters?” I then provide space for students to add 5-6 of their own questions underneath the ones I had written.

For the game to work, the students should write their questions, stand up, and ask their questions of 5 other students. As they ask the questions, they need to pay attention to whether their partner says ‘yes’ or ‘no’. If their partner says ‘yes’ or ‘no’ instead of, for example, ‘I do’ or ‘That’s right’, then their partner loses 1 point. The student with the fewest errors by the end of the game emerges victorious. To ensure that the game doesn’t lose its vitality, a time limit of 9-10 minutes is generally appropriate. It may seem odd to penalize students for giving legitimate answers to questions (i.e., yes or no), but the purpose of this activity is to “push” the students to use language that is somewhat outside their current comfort zone. This should be explained to students at the beginning.

While the initial responses to the questions may not venture much further than “I do” or “That’s right”, the students do tend to offer more creative responses as the game goes on, while also relying less on their question sheet. By the final couple of rounds, they can normally produce the questions – and answers – quite fluently, without really needing to refer to the sheet. For higher-level candidates, they may even be able to improvise the questions if they are given a certain theme to work with at the outset. Another possibility would be to allow the students to rely on their question sheet for the first couple of rounds and then instruct them to put it down for the remainder of the game.

Being “pushed” to produce the language in this fashion conforms to Swain’s (1985) comprehensible output hypothesis, in which, she argues, students develop fluency when they are “pushed” to produce language that is clear and contextually appropriate. As we will soon see, Nation’s criteria for fluency are also met. First, however, I will outline the process of the game in step-by-step form.

As students must play the game with 5 different classmates, they are given the opportunity to have multiple listeners, thereby meeting the first criterion of Nation’s framework. Playing the game with multiple partners adds a sense of excitement and immediacy which prevents the game from going stale. Given, too, that they must ask the same questions of 5 different partners, we can see that the activity also adheres to Nation’s second criterion – repetition. They are given the chance to ask a variety of questions repetitively, which, in accordance with Nation (1989) as well as Swain (1985), should promote the development of fluency.

Despite the existence of a time limit, it does deviate somewhat from the limit suggested by Nation. In Nation’s original activity – 4/3/2 – the time limit is designed to push the students to deliver their speech more fluently each time – namely, 4 minutes with the first speaker, 3 minutes with the second, and 2 minutes with the third. In Yes/No, students are not required to make an extended speech, mostly because of proficiency limitations, so the time limit instead functions as a means of adding excitement to the game. Whether this would provide a barrier to fluency seems unlikely and, if anything, is more appropriate for lower-level learners.

It would be idealistic to think of this activity as a miracle cure for fluency deficiency. We know from research that a great many factors determine the success of language learning (see Lightbown and Spada, 2013). However, in EFL countries like Korea, students typically receive little exposure to English outside the classroom, making in-class fluency-building activities all the more important. If you are teaching oral English – in Korea or elsewhere – then you may have as much success with this activity as I did. 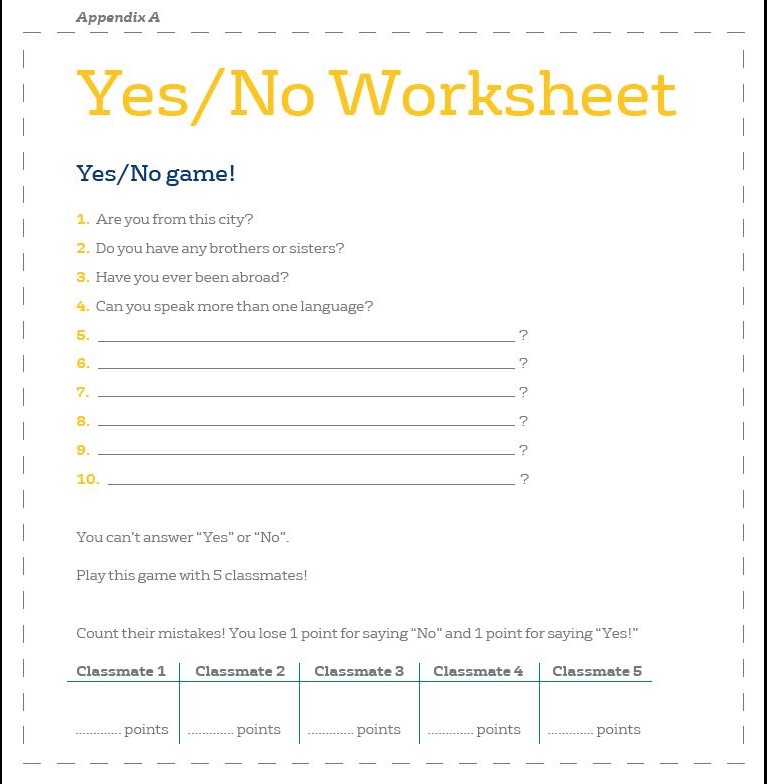 Author’s Bio: Christopher has taught EFL at public and private institutions in Ireland, South Korea and China. He received his MA in Applied Linguistics and TESOL from the University of Leicester and has also published articles in The English Connection, Modern English Teacher, and EFL Magazine. He can be contacted at credmond92@yahoo.co.uk.