The IH Toruń Teacher Training Day 2019 took place last weekend in beautiful Toruń and once again it was a huge success. There was a record number of participants and presenters coming from all across Poland as well as the Czech Republic, Russia, Spain and the Ukraine. There was a real diverse and interesting mix of workshops from a range of IH schools such as IH Bielsko-Biała, IH Bydgoszcz, IH Kyiv, IH Toruń, IH Voronezh-Linguist and IH Wrocław as well as some well-known IH faces such as Anette Igel and Sandy Millin. There were also some big names from the world of TEFL such as Jon Hird (OUP) who gave two workshops on spoken grammar, Katherine Bilsborough (NGL) who showed us how to avoid typical errors that teachers make with materials and Rob Howard (ELTPics) whose workshop on 1-2-1 Teaching was so popular that rooms had to be swapped at the last minute!

The day began at the school itself with four slots of workshops and a lot of yummy pizza. There was also a book fair with the publishers (OUP, NGL and Express Publishing). In the afternoon, the participants moved around the corner to a local hotel to watch two plenaries. The first was by Jon Hird who gave a fascinating insight into ‘Aspects of Contemporary English’; a talk which has now resulted in most of the participants using the expression “innit” on social media! After a short coffee break, the 2nd plenary speaker Katherine Bilsborough gave a fun and light talk entitled ‘Self-Esteem Matters’. She had the room in fits of hysteria at several points and brought the formal part of the day to a positive close.

Many participants then partied the night away at a local bar where they danced, networked and reminisced about an amazing day full of food for thought and a lot of pizza!  Here’s to IH Toruń TTD 2020! 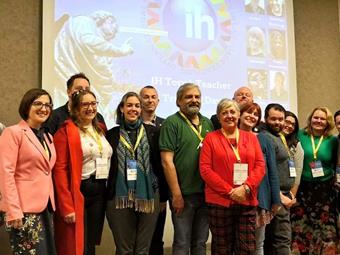 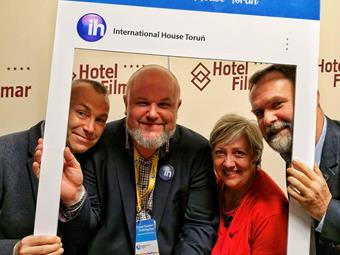 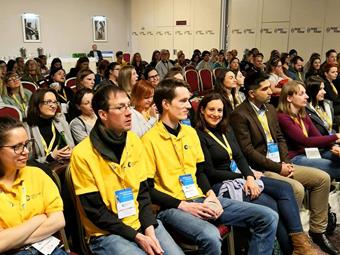