Today the ceremonial enthronement of Emperor Naruhito of Japan will take place in the presence of some 190 heads of state or their representatives. Former and current members of the IH family may be interested to know about the role played by directors and teachers of International House in Japan in preparing Crown Prince Hiro, as he was then known, at the time of his period of study at Oxford University from 1983 to 1985.

The IH-affiliated schools in Tokyo and Osaka opened in 1966 after IH founder John Haycraft and his business partner and investor Tom Hall had visited Japan to investigate possibilities.  The schools were opened and registered under the name International Language Centres (ILC) Ltd. as a wholly British-owned business, an uncommon status in those rather protectionist days. 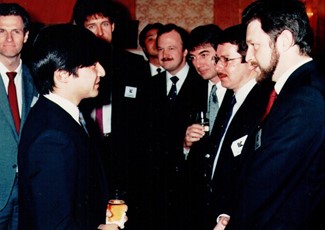 In early 1983 following conversations with the British Foreign Office, the UK Ambassador at the time, Sir Hugh Cortazzi, and Tom Hall, ILC was invited by the Imperial Palace to provide English lessons to the Crown Prince Hiro (Naruhito).  James Duke, director of the Tokyo school, was chosen to start lessons in January 1983. For one or two evenings a week, James would be collected by car and driven to the moat-encircled Palace to meet the Crown Prince in his study for his lessons. James remembers a short length of twisted rope hung from the door handle to indicate to staff that the Prince was in.

In the spring of that year, the Crown Prince travelled to Britain to prepare himself for a two year course of study at Merton College, Oxford University.  Further discussions had taken place with the Imperial Palace and Tom Hall and his wife Mariette were asked to receive the prince as their guest for three months in their beautiful house in Oxfordshire. At the same time two of the Tokyo school’s teachers, a married couple, Diana and Philip Corcos were asked to join the prince as his companions. They continued his English lessons, and gave guidance and practice in the kind of study skills that would be needed at Oxford. They also accompanied him on familiarisation trips around Oxford, playing regular tennis with him and periodically visiting local pubs. 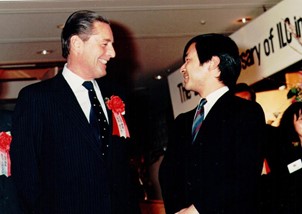 Prince Hiro started his course at Merton College in June 1983.  His field of study was the transportation system on the River Thames during the 18th century.  This built on his previous studies at Gakushuin University in Tokyo on the development of the canal system in Japan from the Middle Ages.  In October 1985 the prince graduated and returned to Japan.  Members of ILC were introduced to him on a number of occasions, most memorably in 1987 when ILC Japan’s celebrated its 20th anniversary.

"In April this year, Mikael and I visited Japan with our now adult children," said Martin Lemon, International House/ILC Japan, 1977-1984. "We enjoyed a reunion with several former staff members, Japanese and British, now like ourselves, retired.  Our former colleagues remembered with some pride and admiration those days when the school arranged lessons for their future emperor and the chairman of their company and his wife welcomed him as their guest to their home in Oxfordshire."

A more detailed account of this period can be found in these books:

The Thames and I - A Memoir of Two Years at Oxford.  A record of his stay written by Emperor Naruhito and translated by Ambassador Sir Hugh Cortazzi (1924-2018) British and Japanese Royal Imperial Relations by Peter Kornicki, Antony Best and Hugh Cortazzi.