Why We Love All Accents!

Accents: everyone has one. They are part of our identity and can signify a multitude of different aspects of our history, including where we’re from, where our parents are from, our heritage, where we’ve lived or where we live now. We love all accents at International House – so much so, that Elias Karlbom and the teachers at IH Seville have written a guest blog post for us about why they love all accents speaking Spanish!

A lot of people might be a little bit embarrassed of their accent when speaking a foreign language, which is completely normal. Experienced speakers can get frustrated when they make little mistakes, even after many years of practice. And then some people feel outright ashamed. But don’t worry, we love your accent! The teachers here at CLIC IH Sevilla know a thing or two about linguistic intermingling, and they think it’s beautiful how each language leaves its own unique marks on other languages it encounters. Interestingly enough, when we were babies we were all able to make all the sounds (phones) of any language, but then sadly forgot the ones not used in our own native tongue. This is why we later on struggle when trying to learn a new language; sometimes we have to relearn how to make a sound we haven’t made since we were crawling on all fours!

Our Spanish teachers have developed such a keen ear for accents that they can often tell where someone is from just after a few seconds. We have students from more than 20 different countries in our school, and of course, some accents are more recognisable than others. We asked around, and the consensus seem to be that people from France and the USA are the easiest to identify acoustically. Our teacher Antonio remarks that, “The students from North America are easy to spot because of their vocalic relaxation, and how they use diphthongs: ou, ui, etc. They also [put less emphasis on] the sound ‘r’ [in their pronunciation].”

The English speakers of the world have always had troubles with that gosh darn rolling ‘r’ (except for certain Scots who even have a particularly strong one). They might, however, have some better luck in some regions in Brazil where the same type of ‘r’ is used. Costa Rican Spanish also offers up a double ‘r’ that’s in the same ballpark which has earned them a reputation of speaking [like a North American].

Nevertheless, sometimes it isn’t as much the pronunciation as it is the melody that gives you away. Juande, for example, remembers the accents from his first class, which was filled with Swedes. “My favourite accent is Swedish, it conjures up fond memories because my first group of students were all Swedes. That rising melody has deeply installed itself in my mind and I inevitably associate it with a very important moment in my career.” Outside of the Scandinavian languages, Italians also seem to have a prosody that they have a hard time shaking, Antonio comments that, “[…] Italians, they always lengthen the stressed syllable and we absolutely love this melodic accent.”

However, perhaps the most confusing problem of all is when the language you’re learning makes a phonetical distinction that’s completely unknown to you. Spanish speakers are used to ‘b’ and ‘v’ sounding the same, just like Japanese can have problems with the ‘l’ and the ‘r’. The Finns are sometimes confused by soft and hard consonants, I remember for example a Finish friend of mine would say “You wanna Ko to the Bub?” when he was thirsty.

All these factors, such as your country of origin, your dialect, how you grew up, and so on, together form your own unique way of speaking, called an idiolect. When it all comes down to it, some new ways of speaking are going to take a little while to learn. But a multicultural classroom is a great way to learn a new language, and everyone in that classroom should embrace their beautiful accent in this globalised world!

So, don’t let your accent stop you from getting out there and practicing, here at CLIC IH, we love your accent! 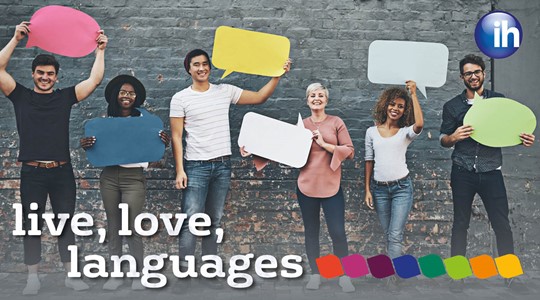