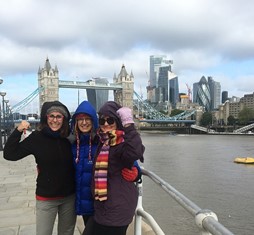 The IHWO Team - Beccy, Giuliana, Karolina, Katja Marta and Lucy - are putting on their woolly hats, fleeces, and warm jackets, to “virtually” walk around the North Pole on the arctic ice shelf.

We have set ourselves the target of walking 100km each, instead of using the car or other CO2 emitting transport. Phew!

We’ll walk across frozen international waters, and through the territories of Norway, Sweden, Finland, Russia, the United States, Canada and finally Greenland. We are expecting to see polar bears, wolves and reindeer along the way! As we go, we’ll be highlighting environmental issues caused by the melting ice cap and the loss of habitat for specialist arctic plants and animals.

We are starting north of Svalbard, a Norwegian island midway between the north coast of Scandinavia and the North Pole. Its mountainous landscape is covered with glaciers, and its waters freeze during the winter. Polar bears are common visitors to Svalbard; we are wondering if we will meet one!

Svalbard's history as a whaling station has long since ceased and currently it is well known for Polar Research, with many European countries having research bases there.

Svalbard is also home to the Global Seed Vault, a seedbank which stores seeds from as many of the world's crop varieties and their botanical wild relatives as possible. The dry atmospheric conditions and near constant temperature of −18 °C are perfect for keeping seeds viable for, hopefully, hundreds of years. Hence in the future they can be used to re-establish biodiversity in areas where natural ecosystems have diminished.

So whilst Svalbard is feeling the effects of global warming with its glaciers melting and seas freezing later in the season, it is contributing to global knowledge and preserving biodiversity for future generations.

So, have you started walking?

We hope that staff and students in IH schools around the world have started to change their habits and walk as well.

IH schools have access to a number of assets and there are some ideas for collaborating with other schools on our main event pages.

Let’s get walking, and we look forward to hearing about the progress of all the wonderful IH students and staff around the world.