Walking around the Arctic 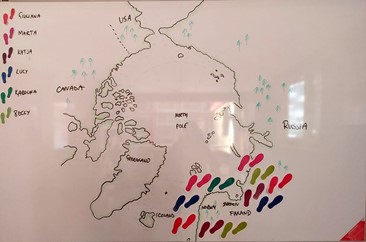 Heading away from Svalbard, our virtual walk around the Arctic takes us past the northern regions of Norway, Sweden, and Finland. Known as Europe’s last great wilderness, this region is a largely pristine landscape of forests, hills and deep, clean lakes. It is home to lynxes, brown bears, wolverines and golden eagles.

For about 3000 years this area has been home to the Sámi people. They are distinctly different to the Scandinavians to their south, with their own language and cultural history. In English, this region is known as Lapland, although today is a term considered by some derogatory. The southern Scandinavians, in Norway, Sweden and Finland, became politically dominant in the 19th and 20th centuries, and the Sámi became marginalised. Their language was banned, and their traditional land rights taken away.

There is now a renewed interest in reclaiming their language, culture and traditional livelihoods. The most well-known of these is semi-nomadic reindeer herding. Reindeer are key to the Sámi way of life because these perfectly adapted Arctic animals provide meat and milk to eat, and their leather is made into clothing, shoes and tents.

As everywhere on our precious planet, there are huge environmental pressures on this pristine region. Plentiful natural resources are being mined and excavated, trees are being felled for wood, and roads and railways are being built to access new Arctic shipping routes. There is also a pressure from the hundreds of thousands of tourists who visit every year to experience this pristine landscape and catch a glimpse of the Northern Lights. 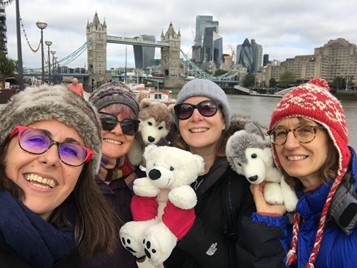 So we are pleased our virtual walk through this region leaves no impact.

As we walk further east we pass Siberia. This is a huge area, stretching from the Ural Mountains of Russia to the Pacific Ocean. Most of its land mass is within Russia, but it stretches to northern Kazakhstan and to the northern parts of Mongolia and China.

Distinct regions of Sibera comprise grassland stepps, forests, tundra, and arctic desert. It is very well known for long biting cold winters and permafrost. Permafrost is the frozen layer of soil that lies under the arctic tundra. It has lain frozen for millions of years.

We hear about the effect of global warming melting arctic sea ice, with the threat of rising sea levels around the planet. Less talked about is the thawing of vast swaths of permafrost. Frozen peat bogs right across Siberia are starting to thaw and release methane gas into atmosphere. Methane is a potent greenhouse gas.

As the permafrost melts the whole tundra ecosystem alters making it increasingly difficult for specialised indigenous animals to find food. The melting of subterranean ice that glues together the peat, clay, rocks, sand, triggers landslides and slumping, resulting in stream flows changing, lakes suddenly draining, seashores collapsing, and water chemistry being altered. Threats to natural ecosystems and biodiversity are a significant consequence of climate change that can easily be forgotten when the news headlines are dominated by Net Zero CO2.

Its inhospitable climate means that the Siberian region has remained largely uninhabited by humans. Where there are few humans, wildlife has a better chance, and Siberia is home to some of the worlds’ most iconic species. The specialist apex predator the Amur Tiger is a Siberian resident. This tiger subspecies is highly endangered with an estimate of only a few hundred surviving individuals. Although it has a large territory, poaching is endangering the very existence of this majestic animal. 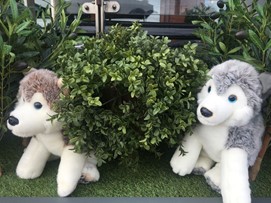 Luckily the Eurasian Wolf, a sub species of the grey wolf, is doing well in its forest habitats throughout Siberia. It is a very intelligent and adaptable animal so it can respond well to changes in its habitat and the food sources available to it.

Across Europe, the wolf is making a comeback. After crossing the Alps from Italy into France in the 1990s, then into Poland and Germany in the 2000s, wolves have now been found in every mainland country. Denmark had no recorded wolf populations for 200 years until one pack was discovered in 2017.

This is exactly the sort of biodiversity good news story that we should be celebrating, but in a densely populated continent, with no memory of living with wolves, these wild predators are not comfortable neighbours. They predate farm animals, and people are scared for their own safety. Although protected animals in EU law, some governments have approved culls to limit numbers. 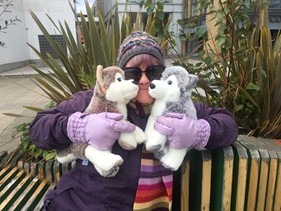 But some more environmentally conscious areas value their wild animal populations, and are seeking to manage any negative impact they may have. For example, farmers receive compensation for killed livestock and grants for wolf-proof fences, and conservationists run education progammes with schools. Europeans think it’s right that extremely poor countries in Africa look after their wild lions, so it’s only right that we do the same for our indigenous predators. “Land sharing” is considered the future model for predator conservation. Although there are currently no wolf populations in the UK, reintroduction programmes are being considered.

Luckily, the grey wolves we came across on our virtual walk were great ambassadors for their wild brothers and sisters, and were very friendly as you can see!