In order to create resources to raise awareness of environmental issues in IH schools around the world, IHWO wanted to bring together students from our own schools.  We were confident they could create content that would resonate with their peers around the world, and we thought they would enjoy and learn something from the process.

With schools across five continents, this was a logistical challenge. How did we do it?

Intended benefits of the project 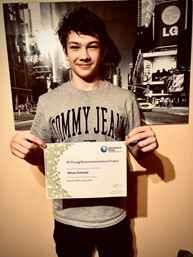 As well as discussing environmental issues, as English language learners there were also the added benefits of

We were confident that students would enjoy engaging with peers from different countries who shared the same concerns for the planet. One benefit of the turbulence of 2020 has meant that all students – wherever in the world – were now confident using Zoom. So embarking on an international project like this was not as daunting as it once may have seemed.

As the project required participants to be confident communicators, working both collaboratively and autonomously, it was decided that learners should be aged between 14 and 17, with a minimum of B2 level in English.

As with anything involving young learners safeguarding was a priority, so each Zoom meeting would also have a volunteer coordinator from the IH network.  This did not necessarily have to be a teacher, but it did have to be a permanent member of staff from an IH school who would, therefore, have received the relevant training in YL safeguarding.

In addition to this, there were privacy issues to consider. We needed way in which the learners could communicate without needing to swap contact details so a Google Drive was set up where learners could save any files related to their work and one document was designated for “communication” so learners or coordinators could write important messages.

Of course, parents were informed about what was involved, and they gave permission for their son or daughter participate in this international project.

The project concept was launched to IH schools in November 2020, and an impressive thirty students from fourteen IH schools volunteered to participate. They were aided by fourteen volunteer coordinators from the staff of their “home” IH school.

A kick off Zoom meeting in November 2020 allowed all students and coordinators to get to know each other, learn about the aims and logistics of the project, and do some team role exercises. These encouraged participants to reflect on the role they played in a team, a learning point which we hoped would give them useful skills and benefit their participation in the coming project. Whilst the academic team and coordinators had these learning objectives, the feedback from students was they were just enthusiastic about meeting people of their own age from different countries and cultures!

One large group of thirty was too unwieldy for practical project work, so we created three project groups of ten, comprising students mixed from different countries.

All groups were given the set deadline of 30th January 2021 to produce their resources.

The students decided whether or not to appoint a group leader and how to divide the work. It’s important to say that although there was a coordinator for each group, the work was all the students own, they were in charge of the content, and were in control of how the project progressed. They broke tasks down into smaller ones and set a series of deadlines to ensure that everything was running to schedule.

They could communicate and share information “off-line” during the week through the shared google docs, and met once a week “live online” to gather feedback from the other group members on what they had done, as well as decide on the next steps.

All three groups decided independently that the most suitable time to meet would be every Saturday for approximately 1 hour, since they weren’t at school and it allowed them all to meet despite being in different time zones. Mornings in Mexico, early afternoon in Europe, and late afternoon in Asia were the common time slots.

Through working on this project, many of the participants said they had changed their own behaviour in a more environmentally-conscious way and some even commented that they had passed on a lot of their new knowledge to their own schoolmates as they enthusiastically told them about the project.

A key benefit stated by many participants was the fact that they had made new friends from different cultures and countries and this give them the opportunity to use English outside the classroom in a meaningful manner.

There are also lots of new skills which the participants developed which we hadn’t predicted.  All of them learnt useful IT skills (even including simple but important skills such as uploading files to a cloud) and some of them even discovered new talents such as creating songs, lyrics, videos and learning editing skills.

There were also many opportunities to develop the soft skills which are so important to young people of today as they develop into the successful young adults that they want to become. Teamwork, problem solving, perseverance, creativity, critical thinking and self-management were all tested as the teams moved from initial enthusiasm and the germ of an idea to creating a finished product to a set deadline.  And all achieved the deadline!

Coordinators commented that they had found the experience worthwhile and rewarding, as they had found the young people’s creativity, determination and willingness to work together to create something of value truly inspiring.  The coordinators were not all teachers (they also only needed to have an advanced level of English) and an unexpected benefit was highlighted by one coordinator who usually works in an admin role because it gave her an insight into what it might be like to work with a group of students and lead them towards a final objective.

In all three teams, every team member played a crucial part in creating the final product and there was definitely a sense of pride and achievement not only from the participants, but also from the coordinators.

We have invited everybody to a thank you ceremony to share their experience with their parents, their teachers, their classmates and other teachers from around the IH network. Of course we also want to celebrate their hard work, as well as inspire other students, other schools and volunteer coordinators to take part in the next Young Environmentalists Project. This is just the start!

Building on this success, IH Young Environmentalists Round 2 will be starting in April 2021!