Lucie Cotterill speaks for IH at IATEFL 2019 in Liverpool

Lucie Cotterill, Educational Projects Director at IH British School Reggio Calabria, spoke for IH at the last IATEFL conference in Liverpool. The aim of her talk “Creating a Culture of Feedback” was to offer a new way to perceive and gather feedback after reflecting on the audience's experiences with it. Here she tells us her experience: 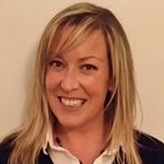 "Until April this year, if asked to think of potentially terrifying experiences, presenting at IATEFL was right up there with bungee-jumping and living for months without chocolate, at least for me.  Which might make you wonder why I even applied to speak there.  Well, the deadline for submitting a speaker proposal is a good 6 months before the conference so, in a rare moment of valour / madness (delete as appropriate) I decided to submit my workshop idea.  It all seemed so unlikely and far away that nerves didn’t come in to it at that point.  At the beginning of December, when I received the email from IATEFL to say my proposal had been accepted, I felt a tinge of nervous excitement but the big day was still too far in the future to concern me. I did, however, decide to apply for the Speak for IH grant.  Not only for the 300-Euro contribution to the expenses of attending the conference (which obviously came in handy) but mainly because I felt that having the IH name behind me might give me increased credibility and, dare I say it, confidence.  Naturally, the closer the event drew, the higher my level of terror but I am pleased to say that I needn’t have been worried at all because the whole experience was an enjoyable and rewarding one, and one that has helped me develop in so many ways. 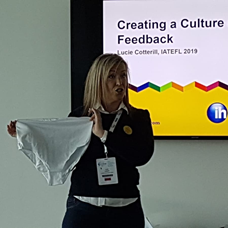 To give you some background to my experience, thanks to my employers at IH British School Reggio Calabria, I had already attended IATEFL twice before but had never felt confident enough to submit a speaker proposal.  I had always viewed the event as a rather academic conference and, not coming from that kind of background, I had feared that I wouldn’t have anything useful or clever enough to share with the attendees.  But I couldn’t have been more wrong! And after attending the conference twice, I realised what a friendly, supportive and down-to-earth bunch the people attending the conference really are.  Of course, there are academic talks but there are also plenty of highly practical ones too and it’s that mix which makes it such a great professional development opportunity.

I gave a workshop entitled “Creating a Culture of Feedback” which focussed on how feedback could be viewed and used by educational institutions to improve not only the individual employees and services but also the organisation as a whole.  It was adapted from a workshop I had been given the chance to run at the IH AMT conference in January 2018, which made it much easier to prepare and deliver.  The five minutes before it began, waiting anxiously to see if anyone (expect a couple of faithful friends) would turn up was quite nerve-racking but I’m pleased to say the room, admittedly a small one, ended up filled to capacity.  And the best thing was that it was filled with people from such different backgrounds – IATEFL is attended by educators from all over the world and this was the first time I’d led a training session with such a diverse range of cultures present.  Wandering around the room and listening to their insights during discussions was really enlightening and I only wish I’d had longer to spend with them!  Amongst the attendees there were even a few ELT management experts, including the brilliant Loraine Kennedy, whose numerous blog posts and talks on feedback had also provided inspiration for my workshop.  I’m happy to say that, even though I was undoubtedly repeating things they’d known for ages, they were so incredibly supportive throughout and after the workshop and that really boosted my confidence as a speaker.

So, all in all, it was a truly rewarding experience which has provided me with confidence, new ideas, increased motivation and even some new friends!  I’m so glad I did it.. thank you, IH!"