IH Portugal support APPI in both Azores and Lisbon

Below, Diana describes how she managed to create a more intimate atmosphere in a large auditorium and Anna talks about pre-performance nerves and how presenting has provided her with some great professional development. 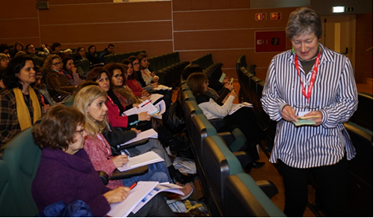 Earlier this year I was invited by APPI - the Portuguese English Teachers Association - to speak to about 120 people at their mini-conference on ‘Multiple Perspectives in ELT’ in the Azores.  Although I’ve previously led quite a few small-scale seminars at ELT Conferences and plenary sessions for IH Directors of Studies and Trainers at YL, DOS and AMT Conferences, I had never given an opening plenary to state-school teachers, none of whom I had met before. When I got to the venue, I soon saw there were other potential challenges I would need to contend with: the auditorium was designed for a maximum of 600 people, and having the speaker’s desk and equipment up on a raised stage would put me at quite a remove from the participants.  I was the first speaker and speaking directly after lunch on the Friday also meant that delegates were still coming into the room fifteen minutes after I had started!

The topic of my talk was “Cooperating to Learn; Learning to Cooperate”, and to ensure the participants could do just that, I realised I would need to make some last-minute changes.  In order to create a more intimate atmosphere, and so that I could be nearer to them, I abandoned the speaker’s table and podium and moved down to the front of the stage area and encouraged them to move towards the front and centre of the auditorium and sit next to other teachers.  And having talked briefly about myself and International House World Organisation, I asked everyone to introduce themselves to the people around them, so that they would feel more relaxed when they took part in the various interactive cooperative tasks I had planned.

It is these types of last-minute practical alterations that can make such a difference to the atmosphere and ultimate success of a plenary talk.

Thank you IHWO for sponsoring me at this mini-conference, which gave me the chance to meet with a new audience of teachers in a different part of Portugal. 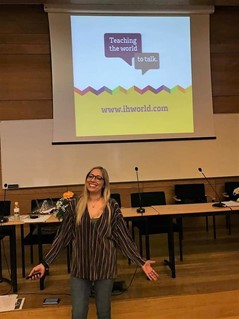 I am regular speaker at the APPI (Portuguese Association of English Teachers) conference, but even after all these years I still get extremely nervous just before I am about to speak. Recently, I watched and interview with Bruce Springsteen, in which he talks about his own anxiety before going up on stage, but he says that once he’s up there, the adrenalin kicks in and all is forgotten. I am certainly no Boss, but it’s pretty much that feeling when I get up on stage.

What I love about speaking at conferences is that it makes me do action research and experiment with new things in my teaching. This has been the best type of Professional Development for me. I’ve noticed how my teaching has changed since I started speaking in conferences, how I’ve grown professionally, and above all, how much more confident I have become, both as a speaker and a teacher.

Conferences are also great places for networking and meeting like-minded people. Since I started speaking, I have become a coursebook writer. My editor had come to a few of my talks at APPI and then a few years ago I received an invitation from my publisher to co-write a series of coursebooks for YLs. I’ve recently become a member of the IATEFL IP&SEN committee, an invitation that came after some committee members came to see my talks.

So, my advice – shake off those nerves, take that risk and I can assure you the experience will be amazing!

I am very grateful to International World Organisation for sponsoring my talk this year at the 33rd APPI Conference in Lisbon, Portugal.