With regards to Environmental Sustainability, IH Milan is particularly aware of its place in the city and the carbon footprint its buildings generate.

Through the 40,000 km challenge which ran from October to December 2021, many more staff have been using bicycles to commute, saving harmful CO2 emissions. This linked directly to IH Milan’s participation in the “Bicipolitana" project led by the Municipality in San Donato Milan, which encourages the use of bicycles throughout the city. The school is an official bike point; they provide a bike rack outside the premises, and offer special discounts to people within the bicipolitana network. The network, which is active in many cities across Italy, has a mission to encourage bicycle use, to lobby city authorities to designate more cycle lanes, and to get companies on board by offering discounts to cycling members. It seems to be working in Milan!

As well as encouraging cycling to work to reduce car use, through the pandemic IH Milan has realised that some remote working is very effective.  Their “smart working” policy means that some meetings are now regularly held online, hence removing the need for travel at all. 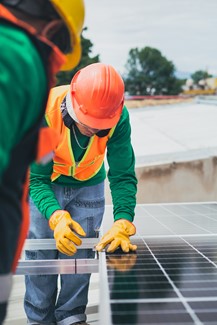 In terms of the carbon footprint of the buildings of IH Milan, the San Donato premises had solar panels installed in 2019 significantly reducing power use from the national grid.  In the same building, they have also recently swapped all ceiling-mounted lamps with new led panels. There are future plans to do this in other premises.

The school can easily identify many things in its day to day operations that it has been doing for a long while to reduce its negative impact on the environment, including;  recycling printer cartridges, sorting waste for recycling, printing on both sides of paper, replacing plastic spoons with compostable ones, banning single use plastic bottles in school, and many more.

By the middle of 2022, the school plans to have a “green champion” to involve colleagues, and promote and implement even more “green process” initiatives with students. This will be taking even further those positive actions which influence sustainable behaviours such as continuing to take part in the IH Young Environmentalists Projects, and including more environmental topics in the curriculum.

From a curriculum point of view, the most significant projects on environmental sustainability have happened during the Teens and Summer Camps. In the Summer Camp, kids are encouraged to recycle materials that any of them could find in their own homes, such as yoghurt and milk containers, eggs boxes etc, to create toys and art projects. Some environmentally focused lessons can be found throughout the normal curriculum, and the plan is to give this more structure in the coming months.

IH Milan have realised that Environmental Sustainability is a topic which its students and stakeholders are particularly engaged with, and have given greater visibility throughout 2021 on its social media channels for all green initiatives conducted by the school.

All these actions, and plans for the future, mean that IHWO is delighted to award IH Milan the “Protecting our Planet” badge. This recognises schools which are proactively taking steps to reduce their harmful effect on the environment, and increasing those actions which have a beneficial impact. The IH environmental Sustainability Scheme has twelve categories, and schools need to demonstrate actions in at least eight.

IH Milan has fulsomely done this, and we wish them all the best in their plans for the future in continuing to raise awareness of environmental sustainability among their staff and students, and continuing to reduce their own carbon footprint.

Completing the review was easier and faster than I thought. Also, it made us realize what we already achieved and the green path for the future!

There is more information on International House's commitment to Environmental Sustainabillity here.