Howard Holland spoke for IH earlier this month at TESOL Spain in Salamanca. Howard is a teacher with IH Zaragoza in Spain. He has been in TEFL for nearly 35 years, and with IH for 13. With a great deal of experience under his belt, he wants to help out some of the young, and not so young, teachers out there who may be just surviving on student books and regurgitating pronunciation exercises. Here is his Speak for IH experience: 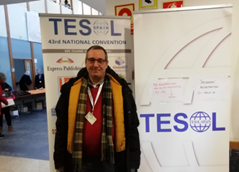 "As a first time speaker at such a large and important language event, there could not have been so many contrasts. There was the uncertainty of if the convention was going to take place because of the coronavirus,  and then there was the freezing cold weather of western Spain, as opposed to the warmth, helpfulness, friendliness and enthusiasm of everyone involved in the organization and those attending the talks.

My talk/presentation/workshop was about the importance of enunciation, not accents. This also involves the idea that speaking fast does not mean that you are fluent. The talk was an hour-long but it could have been two hours. People were interested in how other people were tackling and solving pronunciation problems, without drilling and how to try to personalize pronunciation help in a general way, so that no one feels signaled and all the students can benefit indirectly.

Fortunately for my presentation, very few people disagreed with the affirmation that students need to be able to hear and grasp hard sounds, sounds they feel they can reproduce. The vast majority thought that enunciation helps communication and that if students were thinking about producing hard sounds then the final product emitted would naturally be a softer version. However, if students tried to produce softer sounds then the end result would be even softer.

By enunciation, I am talking about clarity and diction on the part of the speaker, because my favourite question when checking pronunciation is: Would my mother understand? This is especially relevant for teachers who have spent years in a country and ignore pronunciation difficulties because they understand the speaker perfectly well. However, if this speaker were to travel to another country, perhaps they would have problems being understood.

On a practical level, I handed out a photocopy explaining techniques and physical exercises on how to produce individual phonemes or dipthongs, placement of the tongue and a phonetic transcript for students to read out loud and become more familiar with the phonetic symbols. Students have fun making noises and allows even shy students to actively participate. Noone is laughing at them but at the sounds produced.

To objectively analyse situations where enunciation can be seen to be necessary, I used three videos: eleven elevator, I would like a hamburger (pink panther) and Ana  Botellas speech to the international Olympic committee. The first illustrates aspects of accent, which led into a discussion on the importance of knowing about and recognising our own accent deficiencies. The second shows how we as teachers can break up chunks of language so students can learn and repeat easier. The third video is a real example of a non native speaker of English who has a rather limited level, trying to convince a hundred delegates to vote for their candidature to hold  the next Olympic games."