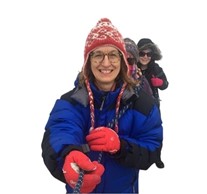 As we valiantly trek through the blizzards of Siberia and head out onto the frozen sea of the arctic ice shelf, what should we spy around the corner than a majestic Polar Bear!

More people in the world have faced lions, tigers, giraffes and crocodiles than Polar Bears, yet we are all familiar with their cuddly looks and friendly face. But don’t be fooled. It’s a good thing not many people come across Polar Bears because they are always on the lookout for their next meal, and a human looks pretty tasty to them. They are one of the only animals in the world which will actively hunt down a human for food.

They are skilled predators. A large male bear may stand about 10 feet tall when on their hind legs, they have strong powerful claws, and they are huge weighing in around 1000lbs. How much is that? That is about the same weight as the entire IHWO team all together. Yes all of us! – Lucy, Marta, Giuliana, Katja, Beccy and Karolina.

They spend most of their time at the edge of the sea ice catching seals. Seals are their main food and are a great source of nutrition. Eating lots of seal blubber gives them the calories and fat they need to grow and keep warm. They are terrifically good at swimming and can swim all day if necessary to get to new ice floes or islands.
How can an animal survive in the freezing conditions of the arctic? We humans have hats and coats and scarves and find it very difficult to survive.

But nature has made sure that Polar Bears have lots of adaptations. They are insulated by two layers of fur, and a thick layer of fat under their skin which may be as much as 11cm deep. The fur insulates them from cold air when they are on land (or ice), and the fat insulates them from cold water when they are swimming. Wet fur is not a good insulator! Small ears and small tail prevent heat loss too. Although we think of the arctic as bitterly cold, summer’s days will rise above zero regularly. In these conditions Polar Bears can easily overheat – which is why they tend to run only for short bursts as running heats them up too much!

They have feet the size of dinner plates, which helps them not fall through thin ice, and not skid on slippy ice.
Polar Bears are highly endangered by climate change because they rely on sea ice to catch seals. They cannot catch them from land. Climate change is reducing the coverage of sea ice in the arctic, so their ability to get food is reducing. If mother bears don’t eat enough they can’t produce enough milk to suckle their cubs, so cub mortality will increase. If mother bears are desperate for food and swim too far to find new places to catch food, their cubs may not be able to keep up and perish.

The Polar Bear’s closest related cousin is the American Brown Bear – commonly called the Grizzly. Grizzlys are found in northern Canada and Alaska. Global warming is creating an interesting dynamic between these two bear species. Global warming is extending further north the range of the Grizzly as the plants and habitats they live in colonise new locations. And reducing sea ice is driving the Polar Bears onto land to scavenge and find new sources of food. Territories are starting to overlap. Although bears are mostly solitary creatures, they come together to mate, and it has been found that genetically the two species are so closely related that they can have cubs together – with the offspring called “Pizzly” or “Grolar”.

The Polar Bear faces a vulnerable future but we are doing our bit to reduce greenhouse gas emissions and halt global warming so all our future generations are able to wonder in awe at this majestic animal. 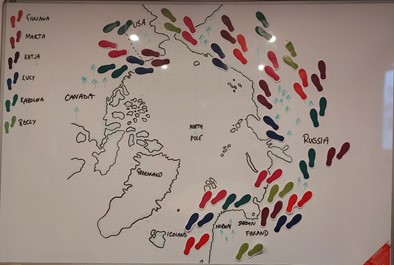