Christopher Walker spoke for IH at the IATEFL Hungary Conference

Christopher Walker, form IH Bielsko-Biala, spoke for IH at the IATEFL Hungary Conference this month. He tells us more about his experience and his session "Towards Becoming an Autodidact".

"When I arrived at the venue in Budapest and saw the programme posted everywhere I suddenly got worried – I was booked as a ‘pre-conference’ speaker before the official opening of the IATEFL Hungary conference, and I realised, looking again at the title of my talk, that some people might be put off by my workshop because the word ‘autodidact’ was so unfamiliar. 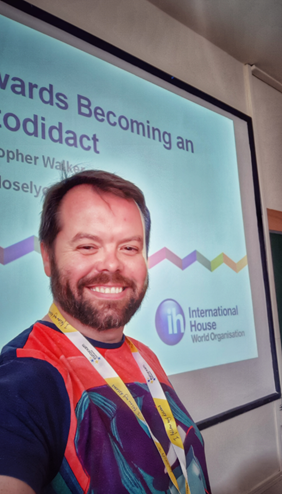 I needn’t have worried. Far from having to speak to an empty room – the worst of my worries – I ended up not being able to move around much as I talked, there were so many people in attendance. And for the other thing – well, a show of hands at the start of the session showed that about two-thirds knew what an autodidact was.

Five years ago, I didn’t know the word myself. I had to check it in a dictionary, where I learned that the word was a combination of ‘autos’, meaning ‘yourself’, and ‘didaktos’, meaning ‘teach’. Essentially, it’s a very clever way of saying ‘self-taught.’ It was also an introduction for me into the world of etymology, of learning where words come from, and since learning about the word’s derivation had helped me to remember its meaning, I thought I might see if it would help my students too.

It certainly did. I had students who couldn’t remember to add the ‘d’ to ‘Wednesday’ when they were writing; after all, we don’t pronounce the letter, so why is it there? My trusty dictionary of etymology though tells us that the word celebrates Odin, the father god in Norse mythology, and who I knew as Anthony Hopkins’ character in the Avengers films. We didn’t call him Odin, though, but rather ‘Woden’, and thus ‘Wednesday’ is ‘Wodenesday’ – literally Odin’s Day. Etymology has worked wonders for my students’ spelling of unusual forms.

Another thing that my students have often wondered about is why we have different words for the food and for the animal, like ‘pork’ and ‘pig’, ‘beef’ and ‘cow’, and so on. Well, that also can be explained through etymology – and I was gratified to see from the smiling, nodding heads in my IATEFL talk that the history is quite well-known. The French, after their conquest in 1066, brought the words for their food with them across the Channel, and that’s why our most common food words sound a bit French – especially compared to the more Germanic animal words. The animals were kept by the English-speaking farmers and game keepers, and that’s why they sound as they do.

My workshop then was a summary of many of the points I’ve been using in my own lessons, but expanded into a general framework, something that can be given to learners so that they can become these titular autodidacts.

Firstly, when students are introduced to new language, they should choose one or two words by themselves – words that ‘speak’ to them more than the average – and look these words up in the dictionary of etymology (www.etymonline.com). 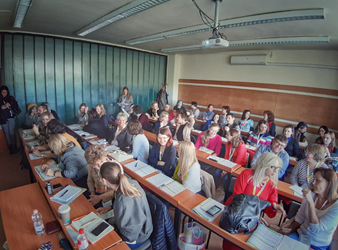 Secondly, they should explore the connections to see where their lexical journey can take them. To provide one example, did you know that the words ‘read’ and ‘riddle’ share an etymological root? Knowing this makes it much easier to remember the more complicated ‘riddle’, as it can be linked to something the student already knows.

Third, when they’ve found an interesting connection, a bit of further research is required. This involves using Google, but not simply to search for the word – all that will yield is a list of dictionary definitions, which is hardly what the student needs most. Instead, the autodidact would use the search structure website: “lexical item” in the Google search bar. I showed the example of ‘embellish’, a beautiful word that takes the ‘en-‘ affix (think ‘enlarge’ or ‘strengthen’) and the Italian ‘bella’ for, well, ‘beautiful’; knowing that the word means ‘to make something more beautiful’ is a good start, but doing a search like guardian.com: “embellish” will give the autodidact a nice list of examples from the Guardian website of articles that use the word. This will help to give them a nice feel for how the word is used in the wider world.

And finally, the fourth point in the framework is to look for opportunities to use the word, especially if the autodidact wants to add the new word to their productive lexical knowledge. This is the trickiest point, of course, and at this stage in my presentation I ran out of time…

I thoroughly enjoyed giving my talk at IATEFL Hungary. I feel much more confident in my abilities in the classroom – if I can stand up in front of that many people, having to teach intermediate teenagers doesn’t seem so daunting all of a sudden. And for this opportunity, the opportunity of going to Budapest and making my presentation, I want to thank International House, and the Speak for IH programme."