Today we hear from Go Academy! International House Dusseldorf and their amazing achievements in our 40,000 km challenge!

When our language student Karen heard about the 40,000 km challenge that GoAcademy! International house Düsseldorf wanted to participate in, she was thrilled:

"I'm taking on the challenge, pedaling at least 30 kilometers every day for it!" 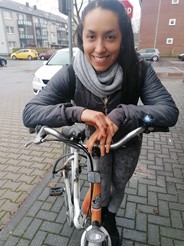 As the capital of North Rhine-Westphalia, Düsseldorf has just 600,000 inhabitants, but about two million commuters who drive in and out of the city every day. Many of them take advantage of the well-developed route network and travel by train. But among the 53,000 students who study in Düsseldorf, it is customary to take the bike.

This is also the case for the language students of GoAcademy! IH Düsseldorf. The first purchase most of them make shortly after arriving in Germany is: a used bicycle! Sagar from India laughs, 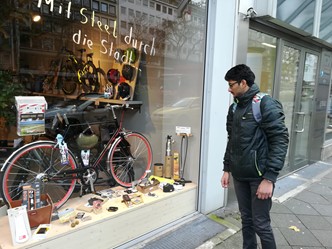 "It made me feel like I belonged right away!"

However, none of them noted and managed as many kilometers as Karen in such a short time: she contributed a total of 2100 kilometers for the 40 000 km Challenge from October 1 to December 10, 2021! Karen:

"It was an incredible amount of fun!!! And I like the idea behind it, to have driven or walked around the world together with other people from other language schools and countries!"

For the trained nurse, living and moving in the fresh air was one of the first things that fascinated her about Düsseldorf:

"That people here ride their bikes a lot and take long walks."

Something that would be unthinkable in her native Colombia. Not only because it's impossible, but also because it's far too dangerous. Karen:

"Bogotá has about 7 million inhabitants. There is neither a streetcar, nor a train, nor even a metro. The streets are packed with cars and overcrowded buses. Although Bogotá is high in the Andes and there are many trees, the air in the city is very polluted."

For us employees at GoAcademy! IH Dusseldorf, it has been completely normal to come to the language school by bike or streetcar, as we are used to it from an early age. Unlike in many other countries, there are hardly any school buses here, and even the youngest children walk to school or take their bikes.

But Karen and the 40,000 km Challenge of international house have shown how important it is to stand up for a healthy environment, for clean air, green trees and fragrant roses. Because they can no longer be taken for granted. We have to stand up for them!

Hey... where is the next bike?