Adjusting to an online world - Part 2: Six months on

It’s Halloween 2020 as I write this, and it seems like an incredibly long time since I wrote the original article back in April.

In April, we were all still hoping that we would get back into a classroom with our students in that school year, but we ended up staying online until the end of June. We moved our young learner groups fully online too, created a system for end-of-year reports to be written within registers rather than our previous separate Word documents, and worked out how to run all of end-of-year tests. In many ways, things were actually easier. Thanks to Barrie Roberts at IH CLIC Seville, we had a multiple file generator for creating one test per student, much faster than using a copier. I didn’t have to spend hours creating a room timetable for end-of-year speaking tests and tutorials, and senior staff were able to drop into Zoom lessons as external speaking testers. Teachers also commented that it was easier to write reports this year.

Normally we run a huge school barbecue with students past and present and their families in June, but obviously this didn’t happen this year. Thankfully, we were able to have a socially-distanced end-of-year party for our teachers in the school garden, so it wasn’t a complete anti-climax. We also managed to run an online pub quiz for our adult students, thanks to the efforts of two of our teachers, Mollie and Monica. In my own life, I found that as lockdowns rolled out around the world my weekends actually became more full of socialising than they ever had before, as friends and family discovered the joys of group Zoom calls.

I wrote the first article when we were just about coming out of crisis mode, still working out how to adjust. By the end of the school year in June, it felt like everything was achievable with some thought and creativity. In many ways, we were very lucky that it was business as usual. Our teachers continued to be employed and paid, our students continued to have classes to attend, senior and admin staff continued to be available to problem-solve and support everyone. I continue to be incredibly grateful to the IH DoS community, and particularly to Lucie Cotterill, for all of the sharing and support as we all learnt to adjust to this new way of working.

Fast-forward to early September 2020. COVID-19 case numbers had never been very high in Poland and most restrictions had been lifted apart from the requirement to wear masks in indoor spaces such as shops or cinemas. However, at IH Bydgoszcz we were still taking all necessary precautions to reduce contact and help staff and students to feel safe.

Again, thanks to Barrie Roberts, we now have a (long-overdue!) online placement testing system for grammar, and students have the option of a face-to-face or a Zoom speaking test. Prospective students can complete the grammar test whenever they want to. We have a timetable for speaking tests, whereas previously students had turned up whenever they wanted to, so it is now much easier for senior staff to manage their time. We haven’t analysed the numbers yet, but it seems like we’ve had a similar number of tests this year to previous years, so our fears about whether we would have as many new students at the school seemed unfounded.

We decided to offer a few groups fully online, a couple of beginner groups fully face-to-face, and the rest of our general English and exam classes were half and half: one lesson per week online, one in the classroom. One-to-one students and companies could choose which format they wanted lessons in. Fully online groups drew students from Bydgoszcz, but also from all over Poland – we have students from Cracow and Masuria too.

Initially, some students and parents complained that we weren’t fully face-to-face, like state schools. Two weeks ago, we had to move fully online as cases numbers have skyrocketed throughout October in Poland, and we’ve had a couple of cases in the school too. I don’t think anyone is complaining now. In fact, a lot of students have been pleasantly surprised by the success of the online classes, and we’ve generally had very good feedback. Despite that, we have inevitably lost a few to technology issues or to wanting to reduce their screen time. Observations we’ve done since March have demonstrated again and again how creative our teachers are, and we’ve all realised that online teaching can be just as engaging as face-to-face teaching with the right preparation.

Student numbers in September were healthier than we pessimistically expected back in early summer, but confusion with state school timetables at the beginning of the academic year meant it took a longer than normal for some students to commit to particular groups and for our numbers to settle. We were in the happy position of needing to recruit extra teachers due to increased student numbers, which was definitely not something I expected to happen this year.

Now that we’re fully online again and with numbers continuing to rise steeply (around 10,000 cases ten days ago to over 20,000 cases today), our main challenge is probably going to be promoting the positive mental health of our staff and students. As of a week ago, under-16s are not allowed outside without an adult between the hours of 8:00 and 16:00, meaning that some of them are already starting to feel a bit depressed. At this time of year, that potentially means no daylight for those children who don’t have a garden or balcony. Staff who have been in self-isolation, especially those new to Bydgoszcz and/or to living abroad, need support with practical matters like buying food, but also intangible things like not feeling too lonely or wondering why they left home in the first place.

The main thing that we’ve learnt since March is that having a strong team and clear communication is incredibly important. We’ve been lucky to have a few weeks in school to start the new academic year off, and teachers were able to have a few lessons in the classroom with most students. It may have been socially distanced, but at least it was something. New teachers have done well to develop their skills working online so quickly, and are very good at asking for help when they need it. The whole team has supported each other throughout, but particularly in the last couple of weeks – at one-point last week, eleven of our twenty teachers were in self-isolation.

Right now, there is no real end in sight. Our first aim is to get teachers back into the school building, then one-to-ones, then group classes. We have no real idea when any of that might happen, though we hope that at least the first stage might be possible before Christmas. Resilience is the order of the day, and thankfully all of our staff make IH Bydgoszcz a great place to weather this storm together.

Whatever your journey has been since COVID-19 first made itself known, I hope that you have been able to stay healthy and safe, and that you have had the opportunity to learn from all of the upheavals of the past few months. There will come a day when this will all be a distant memory, but until then, let’s all hang in there.

Author's bio: Sandy Millin is the Director of Studies at International House Bydgoszcz in Poland. She is also a CELTA trainer and materials writer. She has self-published three books: Richer Speaking, ELT Playbook 1 and ELT Playbook Teacher Training. She blogs regularly at http://sandymillin.wordpress.com and tweets @sandymillin. 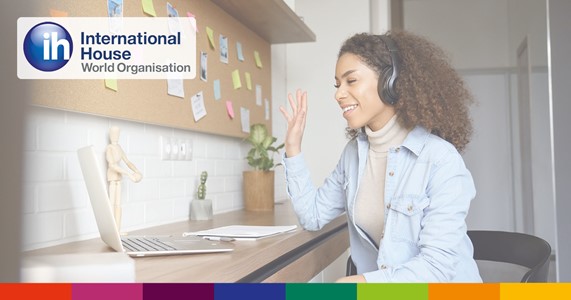